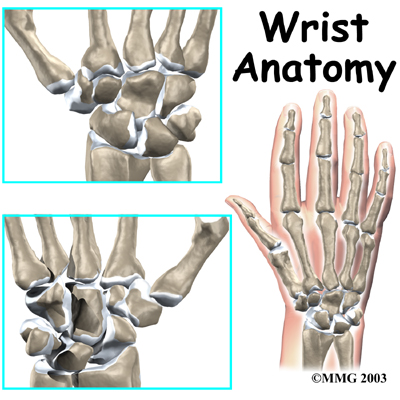 The anatomy of the wrist joint is extremely complex, probably the most complex of all the joints in the body. The wrist is actually a collection of many bones and joints. These
bones and joints let us use our hands in lots of different ways. The wrist must be extremely mobile to give our hands a full range of motion. At the same time, the wrist must provide the strength for heavy gripping.

This guide will help you understand:

The important structures of the wrist can be divided into several categories. These include:

There are 15 bones that form connections from the end of the forearm to the hand. The wrist itself contains eight small bones, called: 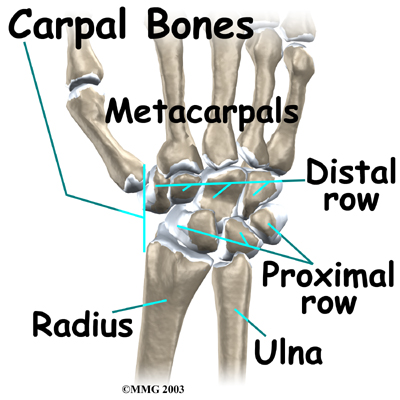 These bones are grouped in two rows across the wrist. The 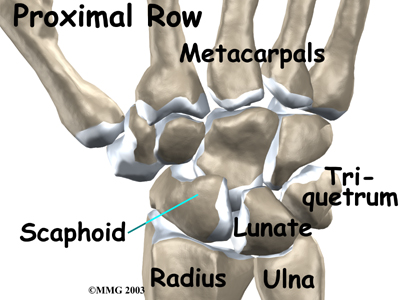 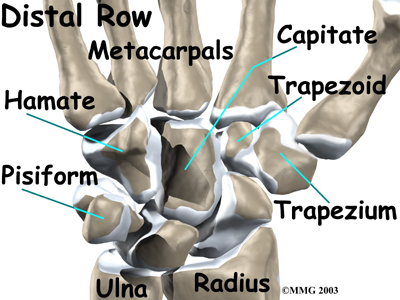 meets the proximal row a little further toward the fingers. The distal row is made up of the trapezium, trapezoid, capitate, hamate, and pisiform bones. 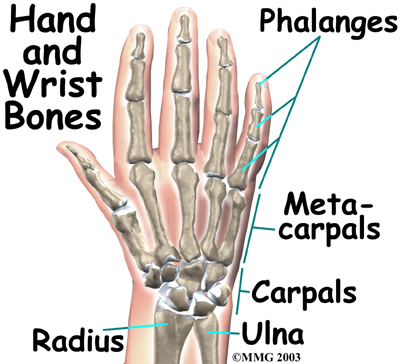 One reason that the wrist is so complicated is because every small carpal bone forms a joint with the bone next to it. This means that what we call the wrist joint is actually made up of many small joints. 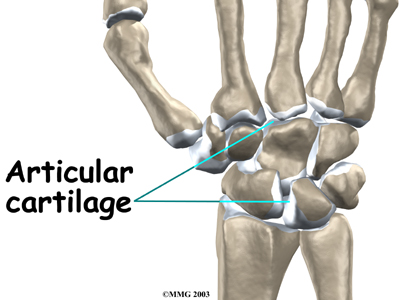 The function of articular cartilage is to absorb shock and provide an extremely smooth surface to make motion easier. We have articular cartilage essentially everywhere that two bony surfaces move against one another, or articulate. In the wrist, articular cartilage covers the sides of all the carpals and the ends of the bones that connect from the forearm to the fingers.

Ligaments are soft tissue structures that connect bones to bones. The ligaments around a joint usually combine to form a: 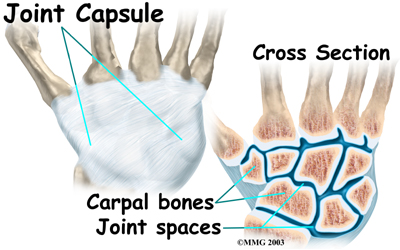 A joint capsule is a watertight sac that surrounds a joint and contains lubricating fluid called synovial fluid. In the wrist, the eight carpal bones are surrounded and supported by a joint capsule. 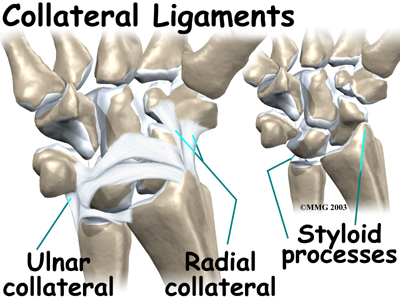 As its name suggests, the ulnar collateral ligament (UCL) is on the ulnar side of the wrist. It crosses the ulnar edge (the side away from the thumb) of the wrist. It starts at the ulnar styloid, the small bump on the edge of the wrist (on the side away from the thumb) where the ulna meets the wrist joint. There are two parts to the cord-shaped UCL. One part connects to the pisiform (one of the small carpal bones) and to the transverse carpal ligament, a thick band of tissue that crosses in front of the wrist. The other goes to the triquetrum (a small carpal bone near the ulnar side of the wrist). The UCL adds support to a small disc of cartilage where the ulna meets the wrist. This structure is called the triangular fibrocartilage complex (TFCC) and is discussed in more detail below. The UCL stabilizes the TFCC and keeps the wrist from bending too far to the side (toward the thumb).

The radial collateral ligament (RCL) is on the thumb side of the wrist. It starts on the outer edge of the radius on a small bump called the radial styloid. It connects to the side of the scaphoid, the carpal bone below the thumb. The RCL prevents the wrist from bending too far to the side (away from the thumb). 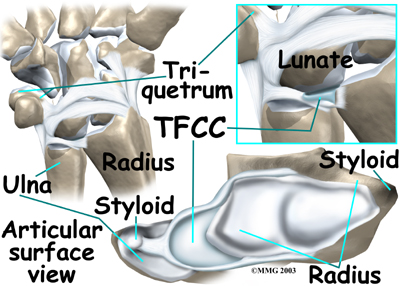 At the wrist, the end of the ulna bone of the forearm articulates with two carpal bones, the lunate and the triquetrum.

A unique structure mentioned earlier, the triangular fibrocartilage complex (TFCC), sits between the ulna and these two carpal bones.

There are several important tendons that cross the wrist. 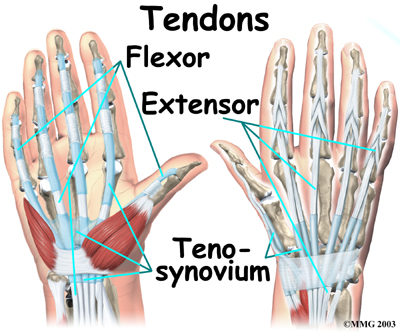 Tendons connect muscles to bone. The tendons that cross the wrist begin as muscles that start in the forearm. Those that cross the palm side of the wrist are the flexor tendons. They curl the fingers and thumb, and they bend the wrist. The flexor tendons run beneath the transverse carpal ligament (mentioned earlier). This structure lies on the palm side of the wrist. This band of tissue keeps the flexor tendons from bowing outward when you curl your fingers, thumb, or wrist. The tendons that travel over the back of the wrist, the extensor tendons, run through a series of tunnels, called compartments. These compartments are lined with a slick substance called tenosynovium, which prevents friction as the extensor tendons glide inside their compartment.

The main muscles that are important at the wrist have been mentioned above in the discussion about tendons. These muscles generally start further up in the forearm. The tendons of these muscles cross the wrist. They control the actions of the fingers, thumb, and wrist.

All of the nerves that travel to the hand cross the wrist. Three main nerves begin together at the shoulder: the radial nerve, the median nerve, and the ulnar nerve. These nerves carry signals from the brain to the muscles that move the arm, hand, fingers, and thumb. The nerves also carry signals back to the brain about sensations such as touch, pain, and temperature. 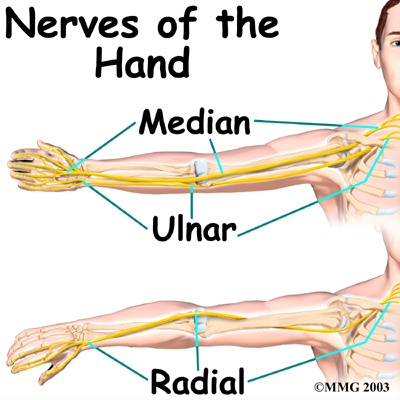 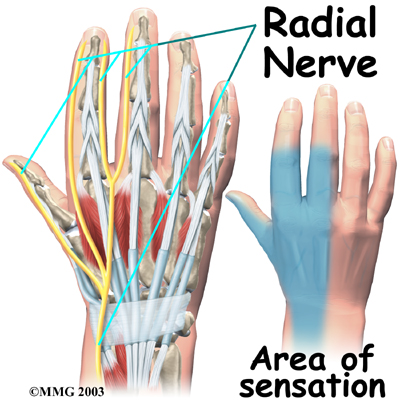 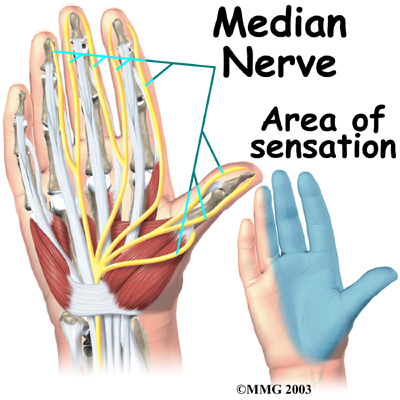 The Median Nurve travels through a tunnel within the wrist called the carpal tunnel. The median nerve gives sensation to the palm sides of the thumb, index finger, long finger, and half of the ring finger. It also sends a nerve branch to control the thenar muscles of the thumb. The thenar muscles help move the thumb and let you touch the pad of the thumb to the tips each of each finger on the same hand, a motion called opposition. 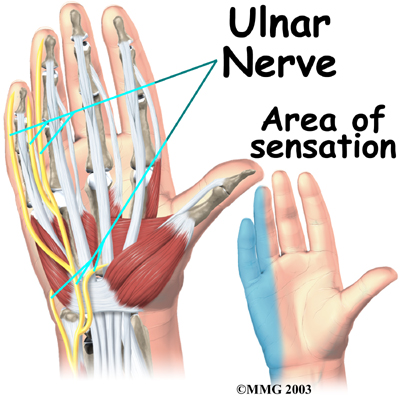 The ulnar nerve travels through a separate tunnel, called Guyon's canal. This tunnel is formed by two carpal bones (the pisiform and hamate), and the ligament that connects them.

After passing through the canal, the ulnar nerve branches out to supply feeling to the little finger and half the ring finger.

Branches of this nerve also supply the small muscles in the palm and the muscle that pulls the thumb toward the palm.

The nerves that travel through the wrist are subject to problems.

Constant bending and straightening of the wrist and fingers can lead to irritation or pressure on the nerves within their tunnels and cause problems such as pain, numbness, and weakness in the hand, fingers, and thumb.

Traveling along with the nerves are the: 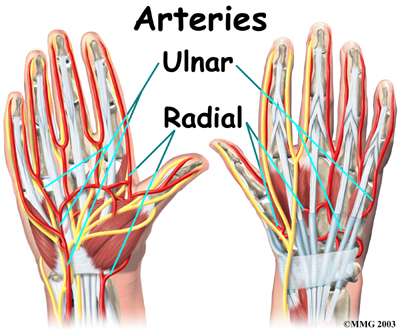 that supply the hand with blood. The largest artery is the radial artery that travels across the front of the wrist, closest to the thumb. The radial artery is where the pulse is taken in the wrist. The ulnar artery runs next to the ulnar nerve through Guyon's canal (mentioned earlier). The ulnar and radial arteries arch together within the palm of the hand, supplying the front of the hand and fingers. Other arteries travel across the back of the wrist to supply the back of the hand and fingers.